If you would like to contribute, please use the development installation and open a PR with your contributions.

Now you can start to make changes.

Once you push the changes to your repo, the Compare & pull request button will appear in GitHub.

Tests will automatically run for every commit you push to the GitHub project. You can also run them locally by executing pytest in your terminal from the root of this project.

The files/folders listed below are ignored when you push your changes to the repository.

Note: If you choose another name for the folder where you want to store the data being downloaded, please add the folder to .gitignore.

The following chart is automatically created by the version of the diagram on the branch master, see source.

If you hover over the image you can zoom or use the full page mode.

If you want to edit the diagramm, please refer to the GitHub Drawio Documentation.

Some tests do not require access to the Konfuzio Server. Those are marked as “local”.

To run all tests, do:

To run only local tests, do:

To run tests from a specific file, do:

How to release with GitHub to PyPI¶

How to use nightly builds?¶ 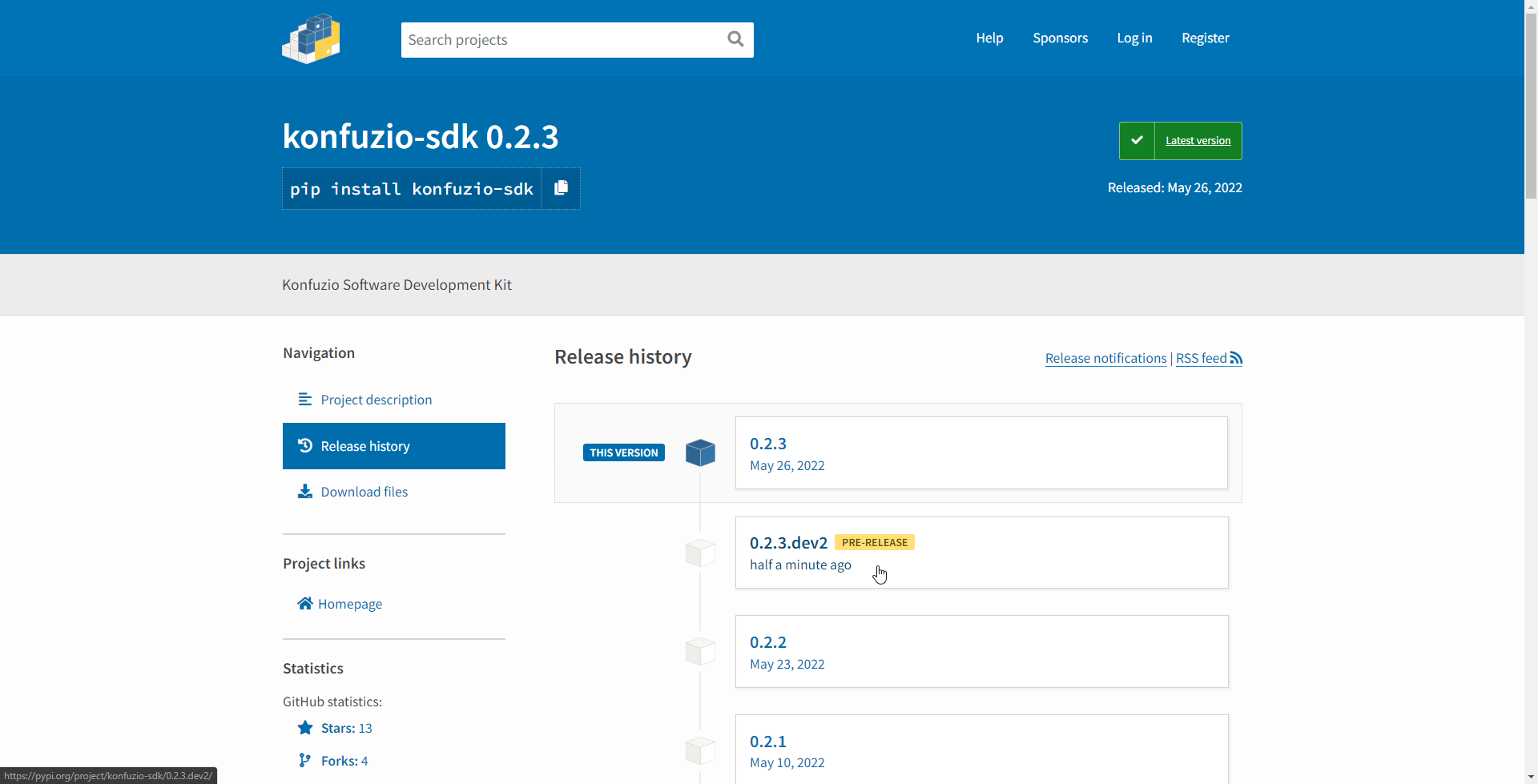 Pre-Releases don’t use tags but reference commits. The version number of a pre-release relates to the Year-Month-Date-Hour-Minute-Second of last commit date on branch master used to create this release. This process allows publish a new package if there are new commits on the master branch.

Every day at 5:19 AM UTC (3:19 AM UTC+2, see code here) a new nightly release of the SDK (master branch) is released to https://pypi.org/project/konfuzio-sdk/#history.

Every day at 6:13 AM UTC a new nightly release of the Server using the latest nightly SDK is deployed at https://nightly-sdk.branch.konfuzio.com/ as a Gitlab schedule from our server repository.

We get an early chance to find bugs with our integration of the SDK with the Konfuzio Server before the official release. During our internal development sprints (2 week periods) we follow the strategy summarized in the table below.

The strategy follows a 2 weeks sprint schedule (10 work days). The SDK process is described in the following plan. The process with DVUI is completely analogous:

If you have problems with the dependencies, a solution could be to use a docker to run the code. Check here the steps for how to run/debug Python code inside a Docker container.

General Motivation for using the VS Code Remote Development Extension¶

When it comes to running your code consistently and reliably, container solutions like Docker can play to their strengths. Even if you are not using Docker for deployment, as soon as you collaborate with other developers testing pipelines have to be in place to ensure that a new merge does not accidentally break the whole project. Collaborating can also mean very different operating systems and configurations that lead to varying behaviors on different machines. This issue is also commonly resolved using Docker. But this of course means that there can be differences between your local machine and the Docker container when it comes to dependencies, which leads to tedious dependency management and prolonged feedback loops (especially on Windows) as you have to wait to see if the code you build really runs as expected in the Docker container. The best solution would be if you could combine the development tools of a Python IDE with the consistent test and execution results of a Docker container. Running a docker container on a local machine is quite easy. Though setting up your container for debugging is not always straightforward. Luckily Microsoft’s Visual Studio Code Remote Development Extension offers a functional and easy to use solution.

Either use this link to download the VS Code or, if you are on Linux and have snap installed, just run (for this tutorial v1.56.2 was used):

If you have not already installed Docker, download and install it here.

In most cases you are going to be using git, so just set up a new git-repository via the terminal, VS Code’s built-in console or VS Code’s git extension. This project should, of course, include the Docker file that is used for deployment and which behavior you want to mimic locally.

If you just want to try out how this all works, you can clone our SDK from its GitHub page and add a Dockerfile with the following content:

In VS Code open the extensions tab (its icon is located in the left sidebar) and search Remote - Containers (or for its ID: ms-vscode-remote.remote-containers). Install the extension.

4. Set up your remote development environment¶

You should now be able to find the remote extension’s symbol (arrows on a green background) in the bottom left corner of the VS Code window (picture below). Clicking on the symbol opens the extension’s command pallet, which from now on is going to be our main access point to the extension.

Now you should see in the file explorer under .devcontainer your devcontainer.json file. Open it. These are the basic configurations of your devcontainer. Most of this can be left unchanged. Maybe give your container a name by changing the ‘name’ variable. Additionally, you should specify all the ports you need inside your Docker container in ‘forwardPorts’. If you are working with the sample project you do not need to specify any ports. 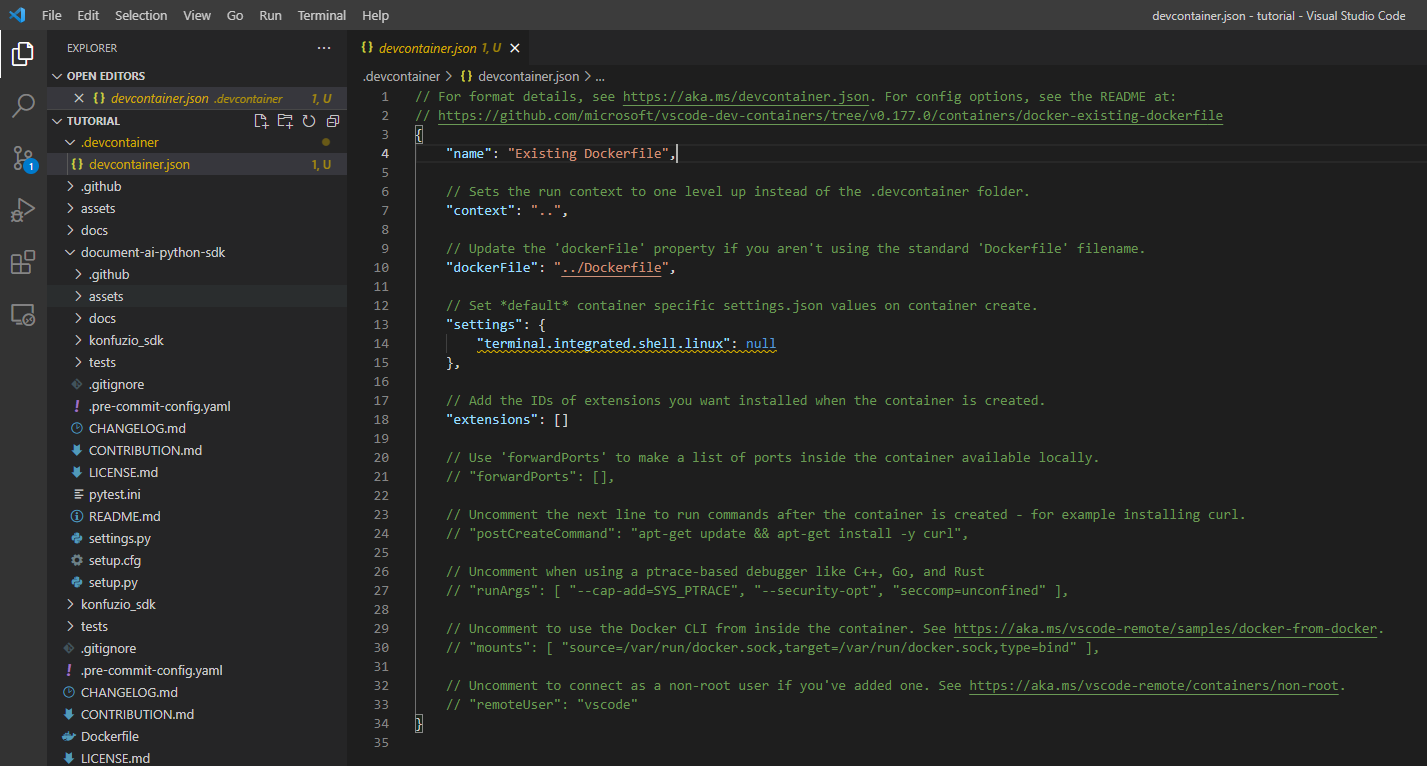 5. Build and run your Docker container¶

Open the extension’s command pallet by clicking on the arrows in the bottom left and search for ‘Reopen Folder in Container’. If you are doing this the first time, this builds the Docker container and thus can take quite a bit of time.

To confirm that you are now inside the container look again to the bottom left. You should now be able to see ‘Dev Container: $your_name’ next to the two arrows. 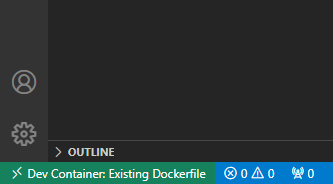 6. Install the Python extension inside the Docker container to debug and run Python files¶

Again open up the extensions tab (now inside the Docker container) and install the Python extension (ID: * ms-python.python*).

Now you can debug/run any Python file you want. Open up the chosen Python file and the ‘Run and Debug’ tab by clicking the run/debug icon that should be now available on the left taskbar.

Click ‘Run and Debug’ > ‘Python File’ and you are good to go. Before make sure to set the needed breakpoints by clicking to the left of the line numbers.

If you want to evaluate certain expressions while debugging, open up the terminal (if it is not open already) by clicking ‘View’ > ‘Terminal’. One of the terminal’s tabs is the debug console, where you can evaluate any expression.

If you are in the sample project you can make sure that the Docker container works as expected by entering the tests folder (‘cd tests’) and executing: